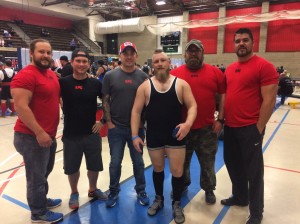 Powerlifting is the sport of lifting things up and putting things down, right? Sort of. While lifting large weights is the basic idea in powerlifting, it is far more complex than that. Powerlifting is extremely demanding and taxing, both physically and mentally, and involves more than just picking something up. A powerlifter must learn bracing, rooting, breathing, foot positioning, bar positioning, eye gaze, head positioning and activation (Rodio, 2016).

In contrast to bodybuilding, which is about obtaining a particular physique, powerlifting is about attaining as much raw strength as humanly possible.

“To be a powerlifter means being dedicated to a goal: Find out how strong you can get, and then get stronger than that,” says Sean Collins, C.S.C.S., a certified USA Powerlifting Club Coach.

Powerlifting has a long list of benefits. It is accessible to all ages, decreases one’s risk of osteoporosis(Rodio, 2016), gives one constant physical and mental challenges and goals, burns a lot of calories, enhances confidence, and, of course, increases one’s strength. Zach Tolchin, a personal trainer at Rock Creek Sports Club, quotes a famous strength training coach, Mark Rippetoe: “Strong people are harder to kill than weak people and are more useful in general.” On top of the above obvious benefits, powerlifting is actually a low risk sport. Powerlifting has lower injury-risk than soccer and basketball!

Rock Creek Sports Club has a great powerlifting community, with approximately 20 members and employees competing in the sport. One reason for the large powerlifting community is the club’s reputation for being open to a wide range of fitness methods. When requests came in for a lifting platform and bumper plates, the club invested in these basic powerlifting tools.

Another reason for the large involvement here, is the club’s sense of comradery.

“Most of the powerlifters we have at this gym have competed together and are always checking in with each other to see how training is going and eager to share programming advice” says Emily Karl, who works the front desk. 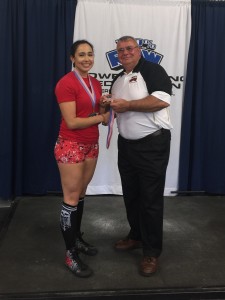 Emily Karl is an example of how powerlifting is not a sport for just men. Powerlifting is a sport both men and women can do as long as they love lifting and do it properly and consistently.

“It burns a ton of calories, a lot of the time more so than cardio (one client of mine burned over 450 calories in one hour of a powerlifting style workout) and it will make you feel strong and confident.” says Zach.

There are currently six competitive powerlifting women at the Rock Creek Sports Club, a considerable number for a gym not “specializing” in the sport. One of our members, Bibi Campos Seijo, set a world record for her age and weight class, with her deadlift of 321 lbs, last year at the American Challenge. Emily competed in this challenge this year on May 20.

Emily was a competitive dancer for over 15 years but stopped while in college. After joining the RCSC, she was introduced to powerlifting and was drawn in to it by its competitive aspects. She had missed the competition from dancing and now enjoys experiencing competition once again, but in “a totally new arena.”

“One of the best aspects of powerlifting is that it requires dedication and constant training, like dance, but in competition there is very little subjective bias- either you get the lift or you don’t.” says Emily.

Emily advises women getting in to powerlifting to be fearless, to not worry about getting “too big” or being judged for lifting heavy.

“Look at any of the female elite lifters and you will see women of all different shapes and sizes- strength is strength, people respect that above all else. It is incredibly liberating to have your primary focus be in strength rather than what you look like.”

The welcoming reputation the gym has is enough to convince women to train here; becoming part of a new group of friends who train, joke around and motivate one another. Emily also suggests online communities for extra encouragement, which are popular for female lifters.

“Quite a few members at the gym have come up to me and told me they were inspired by me to try things they normally wouldn’t which is so flattering. Inspiring other people, especially women, to become more healthy is incredibly fulfilling.” says Emily.

So how should someone, woman or man, start powerlifting?

“People get into powerlifting in all different ways. I got into it just by lifting and getting stronger consistently, to the point where I realized my lifts were at a competitive level.” says Zach.

While recovering from shoulder surgery, Zach attended the 2013 Equinox Open to support Devin Knox, another trainer here at the Rock Creek Sports Club. Experiencing the event firsthand he realized he loved the environment and wanted to be a part of it. Zach did his first competition a few months later: the 2013 Maryland State Championships.

Powerlifting takes patience and discipline. Those starting out won’t walk in on day one and be able to lift a super heavy weight. Emily advises beginners to get a coach or mentor to check form and set guidelines for training to avoid injuries. Emily cites certified personal trainers as imperative to adjusting form and creating efficient movement patterns; the secret to hitting big numbers.

Some trainers for powerlifting here are Devin Knox, Zach Tolchin and Steve Basdavanos.

Zach advises novice powerlifters training for a competition to practice the calls that the judges will be using and to be prepared.

Powerlifting competitively requires focus. You can’t be a jack of all trades at the gym, attending spin, Zumba or doing other forms of exercises several times a week and only training for powerlifting once or twice. However, as Emily says, it is good to be healthy and balanced. Emily started training with Marian Lally to incorporate Pilates into her workout routine, to address muscle imbalances and certain weaknesses she had.

“My first session was probably one of the most challenging workouts I’ve ever had!”

Lastly, all powerlifters should listen to their bodies. As in any workout, it is important to not fight through real pain.

The first couple weeks, one will see the biggest change. Then the real patience kicks in. 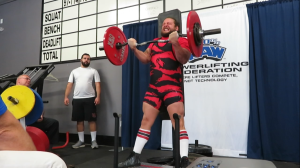 Employees and members at the gym are consistently training and competing. Events are held throughout the year depending on which federation in which you compete. Some of the popular federations are USAPL and 100% RAW. Most competitions have three lifts: squat, bench press and deadlift, however 100% RAW has a fourth: strict curl.

On May 13th, the USAPL Maryland State Championships were held in Dundalk, in which Zach and Steve competed. On May 20th, Devin Knox and Emily Karl competed in 100% RAW’s American Challenge in Prince Frederick, Maryland. It was Emily’s third “full power” meet but her first time performing in this particular federation, first time competing without supportive neoprene knee sleeves and the first time performing the strict curl! Both Devin and Emily placed 1st in the events they competed in and set Maryland records in the curl.

All results will be compiled at the end of June or July, from challenges across the country. Those with the best lifts over all will be selected to lift for Team USA in the world championships this fall!

One interested in powerlifting competitively should note there were drug tests at 100% RAW’s American Challenge. The majority of federations take steroid use very seriously.

If you are interested in powerlifting talk to a trainer! And don’t be intimidated, powerlifting is for everyone. We’ll see you on the lifting platform!