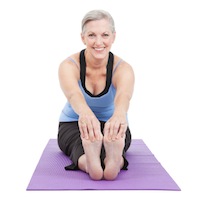 Here’s more evidence why it’s important to get up and move. Whether your gardening, walking, or running, you’re doing your part to help prevent Alzheimer’s, says a new study.
A new study published last week in the journal Neurology, found that higher level of physical activity — not just exercising — is linked to a reduced risk of developing Alzheimer’s disease even in people over 80.
Researchers asked 716 dementia-free men and women in their 70s and 80s to wear a device that recorded a person’s total daily activity (including mild activity such as cooking or walking.) This was done up to a period of 10 days.
Then, over the next four years, the participants in the study underwent cognitive tests and were asked to report how often they engaged in physical activities and other social or brain stimulating activities.
Results showed that those who were the least active in the beginning of the study (the bottom 10%) were almost three times as likely to develop Alzheimer’s.
In addition to this study, other research in the recent years focused on the link between physical activity and Alzheimer’s shows that the more vigorous the activity, the better chances you have.