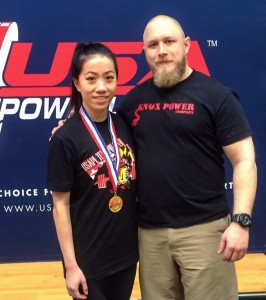 When Rock Creek Sports Club Personal Trainer Zach Tolchin spotted member Jeanne Liu at the gym – he noticed her commitment to hard work . However, he also noticed that her workout routines were… “a little all over the place.”  So he offered her a orientation session and a  couple of things became obvious right away.

“I saw that she was quite strong for her size and I also saw she was incredibly determined and focused, ” says Tolchin , adding that her background in dance also gave her a solid foundation of core and lower body strength.

After some discussion, Tolchin had peaked Liu’s interest in powerlifting, so Tolchin wrote her up a plan to help her train, and told her to check in with him once in awhile, to discuss her progressions.   Well, fast forward to November 2015, and Liu was taking part in her first competition — The Maryland State Championships — and with Tolchin coaching her, she won gold for her weight class!

And  23-year-old Liu has kept going!  Earlier this month, she also competed at the USAPL Terrapin Open – and walked away with another gold in her weight class – 114 lbs.

Her lifts in this past competition were as follows:

Check out the video of her squatting:

“Jeanne has come a long way in a short time, she’s incredibly determined, competitive, and focused and I’m incredibly proud of her and her accomplishments,” Tolchin said.  “I’ve had so many people come over to tell me they’ve seen her lifting in the gym and seems so focused that it’s almost zen.”