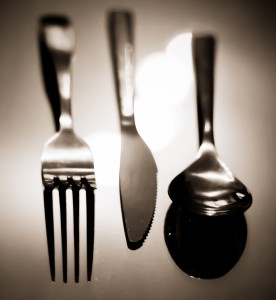 Some experts have said that one way to weight loss, is something called “mindful eating,” which, in short, is taking your time at your meals to give your brain and body enough time to register your enjoyment of the food and in turn, know when you have had enough.

Some of the suggested ways to start doing this are:

Now researchers from Oxford may have discovered another easy trick to encourage you to practice “mindful eating” — heavier utensils.

“Researchers from Oxford University gave 130 diners at a hotel restaurant in Edinburgh, Scotland, identical meals of trout, mashed potatoes, spinach capers and brown ship butter; however, half of those experimented on were given cutlery that was three times heavier than the cheap knives and forks the other half received.

“Those with the heavy cutlery said they liked their meals about 10 percent better and were willing to pay 15 percent more for that same trout dish.”

Charles Michael, chef in residence at Oxford University’s Crossmodal Research laboratory explained to Wired UK, that this could be attributed to something known as “sensation transference,” where people associate better utensils as better quality, therefore better food.

“It’s interesting to think that the heavier weight of cutlery could be making us more mindful, without us realising it,” he said.