Yoga: The Basics and Benefits 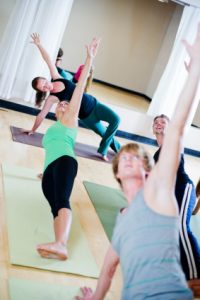 You’re stressed out, your back hurts, your shoulders are stiff, you can’t concentrate, and you just need some time to relax! However, there’s just not enough time, because you know you have to get that workout in today. Don’t worry, you can do both with Yoga at Rock Creek Sports Club!

You’ve probably heard of yoga before, you may have seen people practicing it in parks, or here at Rock Creek, but do you know what yoga really is?

Short history — some say yoga may actually be at least 5,000 years old, consisting of breathing exercises and postures to help practitioners prepare for long hours of meditation and sitting still. But today, along with thousands of years of changes and advancements, it’s so much more than that.

There are many types, practices, and forms of yoga (we offer several here at Rock Creek Sports Club!), but most revolve around similar central focuses: increasing flexibility and strength through a series of movements, or postures, and controlling your breathing to help you control your body and your mind.

Stress Reduction: When we’re stressed out our brains release a large amount of a hormone called cortisol into our bodies. Cortisol can be a good thing during an emergency (think broken bones) but otherwise it can lead to ulcers, throw off our immune system, and lead to high blood pressure, and weight gain.

The breathing exercises in yoga can help you learn to control your breathing, and return your body’s nervous system back to its normal, rest and relaxed state.

Increased Fitness (Pay attention to this one Men!): Yoga isn’t just about relaxation! Many of its poses, will work every muscle in your entire body all at once. At the same time, because your working against the natural resistance created by your body, in time you’ll build strength and endurance as you hold these poses for a longer period of time.

Increased Flexibility: In yoga, you’ll often practice a series of poses known as “asanas” which safely stretch your muscles, helping to release the lactic acid that’s built up in your muscles from general use (or overuse) and causes stiffness, pain and fatigue.

Yoga also increases your range of motion in your joints, and stretches your soft tissues including ligaments, tendons and the fascia sheath that surrounds your muscles. In one study, participants had up to 35% improvement in flexibility after only eight weeks of yoga.

Increased Health: Studies show that Yoga can lower blood pressure, slow the heart rate, boost your immune system, relieve back pain and arthritis, improve energy levels and help with depression. It can also help those night owls fall asleep faster, one study found that insomniacs fell asleep minutes faster and slept an hour longer each night after two months of doing a 45-minute series of yoga poses daily before bed.

Yoga: A heart-opening type of yoga in the style of Anusara–a unique alignment system that is an essential fitness tool for the beginner and the athlete alike. The class will be a strong and safe flow yoga class.

Hatha Yoga: The focus is on the physical postures, breath and mind. A blend of sustaining and repeating poses (Iyengar) with poses that flow in sequence from one to another, following the breath (vinyasa).

Open Flow Yoga: Experience the benefits of yoga as students flow from one pose into the next, using mindful breathing and proper alignment techniques.

Check out the schedule here and join us for a class!