Study: Light Weights May Be Just As Effective as Heavy Weights 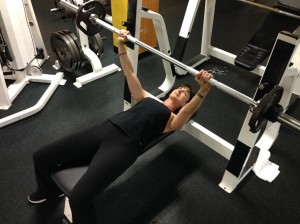 To get stronger muscles, you have to lift heavier weights right? Well, maybe not, according to a new study published this month in the Journal of Applied Physiology.

According the New York Times, scientists gathered a group of 49 young men who had been weight training for at least a year and tested their strength, fitness, hormone levels, and muscular health. Then, the subjects were randomly divided into two groups.

“One group was assigned to follow the standard regimen, in which weights were set at between 75 and 90 percent of the man’s one-repetition maximum and the volunteer lifted until he could not lift again, usually after about 10 repetitions.

The other volunteers began the lighter routine. Their weights were set at between 30 and 50 percent of each man’s one-repetition maximum, and he lifted them as many as 25 times, until the muscles were exhausted.

All of the volunteers performed three sets of their various lifts four times per week for 12 weeks.”