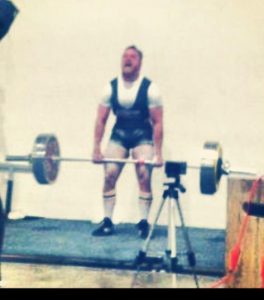 The meet consisted of three events: Squat, Bench Press and Deadlift. For each event you have three attempts — an opener, a second lift, and third lift — and they count your heaviest attempt toward a three-lift total. Devin says with the help of fellow trainer Zach Tolchin he started training for the meet about four months before hand, six days s a week, two to three hours a day, focusing on those three lifts: squats, bench press, and deadlift.

“I would squat ,bench and deadlift twice a week , and sprinkle in assistance moves afterward,” Devin explains. “Assistance exercises are exercises that help the main movement of squat, bench, or deadlift.” He also made sure to take a break when his body called for it. “I peaked about two months into my training where I had to take about a week off from lifting in order to let my body recover, but after that it was back to work with near max and max lifts” Devin adds. “The week leading up to the event I also took off to let my body completely recover.” 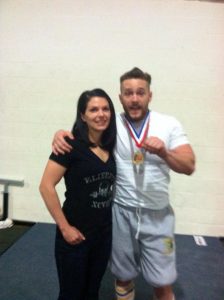 And Rock Creek Sports Club member Dave Lindoefer, rocked the meet too, especially since it was his first powerlifting event since 1977! Dave broke his current deadlift record too, with 319-lbs!

“The thing about power lifting is that it is an individual sport,” Knox explains. “The main goal is to break personal records and focus on doing the best you can do. Winning your weight class with the highest total is just icing on the cake.”