RCSC Member Needs Your Help To Air His Documentary

By admin4447
Posted May 9, 2012
In Blog, Member Highlights
RCSC Member Needs Your Help To Air His Documentary2012-05-092012-05-09https://rockcreeksportsclub.com/wdpr/wp-content/uploads/2019/07/rock-creek-sports-club-logo.pngRock Creek Sports Clubhttps://rockcreeksportsclub.com/wdpr/wp-content/uploads/2019/07/member-highlights.jpg200px200px
0

“An Article of Hope is a powerful story of a journey of the human spirit. It is a story that reaches across generations, and needs to be told. Three men, born at a different time in history, whose lives are woven together by a twist of fate.” 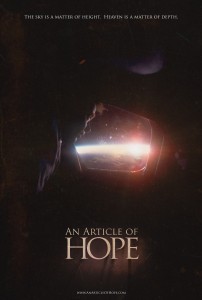 Today we’re talking to Rock Creek Sports Club member Dan Cohen. Dan recently filmed a documentary called “An Article of Hope” and he needs our help making sure the world sees it. To help get An Article of Hope on on PBS, he needs to raise at least $50,000 by May 26, 2012. Please help by donating here.

Q: How did you get into documentary making?

A: I spent more than two decades in television journalism as a producer. Most of my career was here in Washington at channel 5, and then channel 4 for 10-years. But I always wanted to make documentary film so after a long and successful career in TV news I left and started my own production company.

Q: What inspired you to make this documentary?

A: Ever since I was a child I have been fascinated with space. I am a space geek. So when the Columbia accident happened I was very tuned in. Shortly after the accident I learned about the story, that a member of the Columbia crew, Ilan Ramon who was from Israel, had carried a very tiny Torah scroll with him into space. The scroll was was from the Holocaust. The scroll belonged to a member of the science team supporting Ramon on the ground during the mission. The scientist – Yoya- was in Bergen-Belsen when he was 13-years old. A Rabbi had smuggled the scroll into the camp, and Yoya had a secret Bar Mitzvah in the camp and read from the scroll. After it was over, the Rabbi told the boy that he did not think he would survive, so he gave Yoya the scroll with the condition that he use it to tell the world what happened in the camp. Tragically the Rabbi did not survive, but Yoya did. More than 6-decades later Ramon (who was the son of a survivor) sees the scroll in Yoya’s study and asks if he could take the scroll with him to space to tell the story of Bergen-Belsen during a live broadcast from the Columbia. 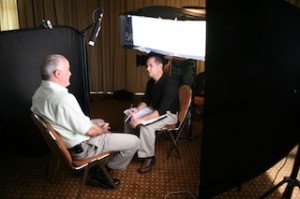 Q: What do you want people to know about it?

A: The Columbia crew was the most diverse group of Astronauts ever to fly together in space. They demonstrated to the world the importance of diversity, what can be accomplished if we all work together for the greater good. At the same time, woven through them is this story from the Holocaust, an effort to stamp out diversity in our world. Their journey, and Yoya’s journey become a journey of the human spirit. In today’s fractious world, I believe this story needs to be told at a time when we need more stories of hope.

Q: Tell us about what you’re doing on Kickstarter and why:

A: We have an offer from PBS to bring this powerful story to millions across America on network television. But because PBS is a non-profit network, we must raise underwriting to sponsor the film. So we have started a funding campaign on Kickstarter to raise $50,000.00 of the $90,000.00 we need to complete our agreement with PBS. People can log onto Kickstarter and contribute. The challenge is, you get one month to raise the money, if you hit the goal you get the funding, if you don’t hit the goal you get nothing, and nobody gets charged on their credit card. So it’s all or nothing. The other part is to get people to help spread the word about Kickstarter as far and wide as possible. Put the link on your Facebook page, tweet it, blog it, email it, even phone a friend. Anyway you can think of to get it out there.

Q: How can people help?

A: Long onto our Kickstarter side, pledge and then spread the word! http://www.kickstarter.com/projects/1641808167/an-article-of-hope