Member of the Quarter-Steve Ehrmann

By Jamie Potter
Posted July 1, 2017
In Blog, Member of the Quarter
Member of the Quarter-Steve Ehrmann2017-07-012019-10-16https://rockcreeksportsclub.com/wdpr/wp-content/uploads/2019/07/rock-creek-sports-club-logo.pngRock Creek Sports Clubhttps://rockcreeksportsclub.com/wdpr/wp-content/uploads/2017/07/angela-and-steve.jpg200px200px
0 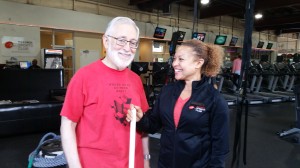 Steve Ehrmann, 68, has always done push-ups and sit ups as a way to stay fit. In his 20’s and 30’s he enjoyed running. When that eventually caused permanent tendonitis and, later, bone spurs in both feet, he switched to bicycling. He started outdoors and moved to indoor cycling in the last ten years. It was around this time he joined Rock Creek Sports Club. “I wanted to put off getting rickety as I got older” he jokes. Steve felt the stationary bike wasn’t enough, but was intimidated by all the possibilities the Club had to offer, so he asked for a suggestion for a trainer.

“I’m so grateful they suggested Angela Sims,” he smiled.  “When I asked my wife to describe my philosophy of working out, her response was the same as mine: ‘Do what Angela says.’ I’ve been an educator all my life and I know great teaching when I see it.”

Steve started off training two sessions a week.  After many months, he felt that his progress was too slow; travel or catching cold could set him back.  He shifted to three weekly sessions and that has really helped.  Angela creates workouts for Steve that focus on flexibility, core, and balance. Steve is determined to continue his progress, despite the occasional set-back from injuries and illness and the challenges of travel. When he finds he has been away from the gym too long he becomes “stubborn” again about exercising and gets back into his routine! 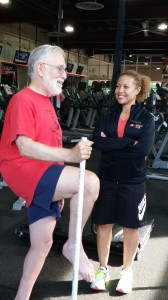 As a researcher and writer, exercising makes Steve feel mentally sharper. Weight loss helps him feel light on his feet and working out in general has helped ease aches and pains. RCSC staff have truly supported him in his journey.

“Wanting [Angela] to be proud of me is a lot of what keeps me going.” says Steve. He believes that when he is training with her he is able to summon up 2 to 3 times the endurance and reps than he could on his own.

And Angela is proud! She reports he no longer has frequent knee and shoulder pain and has progressed to heavy bench presses, chest flies, and decline leg presses.

“Even on days when he is not feeling his strongest, he comes to train anyway and always works hard, sometimes asking for heavier weights!” Angela says. “These are just some of the reasons I’ve nicknamed him ‘Champ’.”

Next time you see Steve, or Champ, be sure to congratulate him!