Member of the Quarter- Phil Tofilon 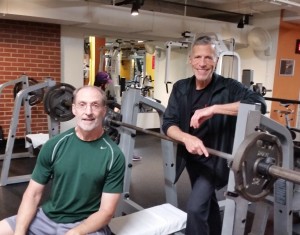 Phil Tofilon, a 62 year-old cancer research scientist at NIH, attends RCSC with his wife, Corie. Active in his youth, and an avid runner until 2013, Phil joined RCSC when lower back pain caused him to look for low-impact aerobic exercise and core strengthening.

Despite the changes in his exercise regime and ongoing physical therapy, his back problems continued. To alleviate pain and correct lack of mobility, he had surgery in January 2015 to fuse part of his lumber spine. Unfortunately, there were complications. Phil had to undergo three additional surgeries, spending four months in the hospital and two months in outpatient rehab to regain strength in his hands and to relearn how to walk.

Phil had been training with Steve Basdavanos in 2014. After his surgeries and rehab he returned to RCSC on walking sticks and started riding the recumbent bike. He then added intermittent training with Steve, which turned into weekly half hour sessions. A couple of months later they moved to 1-hour sessions, which they continue today. Phil’s goal was to walk well enough to hike the trails in Rock Creek Park with his wife and dogs. Through training with Steve, perseverance, discipline and motivation, Phil met his goal by Christmas of 2015. He has only continued to improve since that time! 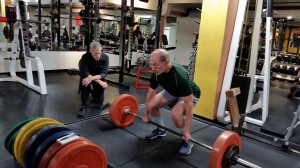 Phil also works hard to slow any age-related decline in fitness. He now works out five days a week: three days focus on aerobics, flexibility and balance and two days on strength. One of the strength days is his training session with Steve, which also incorporates a focus on core work. Phil notes that today there is a great deal more information available on effective training methods as opposed to when he was younger, or even when his kids were growing up in the 90s. He appreciates that Steve has this knowledge and incorporates it their training sessions, creating challenging yet safe workouts.

“There are a number of ‘small’ muscles that are difficult to isolate, yet critical to balance,” says Phil. “Steve showed me the appropriate exercises to target these muscles, which I do on a regular basis. There is a fine line between working hard and risk for injury. It is important to have a qualified trainer that will push you up to the line”

Phil’s hard work is inspiring to anyone who has been set back due to surgery. If you see Phil, congratulate him for his perseverance and for being RCSC’s Member of the Quarter!