Member Of The Quarter: Lee Goldstein 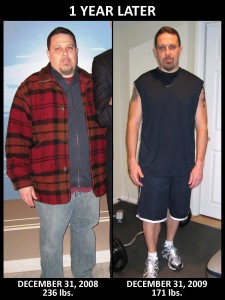 Rock Creek Sports Club is pleased to announce Lee Goldstein as the Member of the Quarter for second quarter of 2010. Lee was selected by the management team for his sincere loyalty to the club, its members and its staff, and for his incredible accomplishment of achieving his fitness goals.

Lee had been a member of the club in the past but had allowed fitness and his health to be a low priority in his busy life, eventually canceling his membership. A few pounds later, Lee was ready to make some serious lifestyle changes. He rejoined the gym in February of 2009 and started to come 6 to 7 times a week to use the cardio machines. In May of 2009 Lee began to work with RCSC personal trainer, Devin Knox, twice a week in order to introduce strength training into his routine.

Additionally, Lee made changes in his diet. He followed conventional wisdom and avoided fad diets. The biggest change was made in the beverage department – water was the beverage of choice. While Lee continues to enjoy a small glass of orange juice or cold beer, he has not had a soda, ice tea or other soft drink in over a year! Another major change was altering snacking. Lee no longer indulges his sweet tooth and instead snacks on fruits and nuts. Lee eats several times a day and still enjoys a slice of pizza from time to time but has controlled his diet with portion control and moderation.

A year after rejoining Rock Creek Sports Club, Lee is 70 pounds lighter, is stronger, and looks great. The before and after pictures tell the story – regular exercise and moderation in diet can lead to a healthier life and a new wardrobe! We are truly inspired by Lee’s hard work and determination.