Member of the Quarter: Joff Pincher 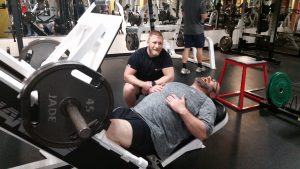 When it comes to making positive changes in your life, it really helps to have a good attitude, and anyone here at Rock Creek Sports Club will tell you that Joff Pincher has one of the best.  With his upbeat personality — along with his hard work and outstanding progress— Joff was an easy choice for our Rock Creek Sports Club Member of the Quarter!

Joff tells us that there was a time he would have described himself as very fit, but after taking 10 years off from exercising, he decided to join Rock Creek Sports Club back in February to shed some weight and get healthy. Or as he joked, “I wanted to get fit enough to get fit.”

Joff, who’s a 52-year-old stay-at-home dad with twin 4-year-olds, says he was also looking for ways to combat diabetes, and he had read that strength training would be very beneficial.  So in addition to joining the gym, he also signed up to work with RCSC Personal Trainer, Zach Tolchin .

Joff works out with Zach twice a week now, focusing mainly on strength training, such as squatting. In addition to these sessions, with guidance from Zach, Joff also works out on his own 2-3 times a week, with free weights, plus some cardio work.

Since joining in February, Joff has lost 45 pounds, reduced his medication to 10% of what it was, and his blood pressure has dropped.

“If you pick up a 45-pound dumbbell, or plate, it’s a lot of weight,” Joff says enthusiastically. “ I had a made-to-measure suit and it simply doesn’t fit anymore. I told Marc (RCSC Manager) that I think he has to pay for it. None of my original gym gear fits either.”

These awesome results are especially encouraging for anyone on the fence about joining a gym.

“I’ve been super fit in my life,” Joff explains. “I was wondering if I was going to be disappointed in myself. I had a lot of catching up to do. My first ambition was just go to the gym, and nothing else.  And it’s been brilliant.  The Rock Creek Sports Club atmosphere, the coaches, the members, they are all very encouraging.”