Member Of The Quarter: Barry Trebach 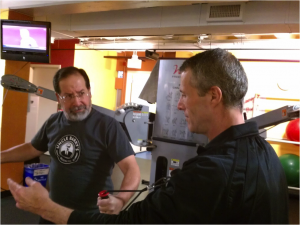 Rock Creek Sports Club is proud to announce Barry Trebach as the Member of the First Quarter of 2012. The management team selected Barry due to his standing as one of the charter members of Rock Creek Sports Club and for his dedication to working out. In fact, his work out pattern mirrors a record of consistency achieved by a well known baseball player who shall remain nameless as Barry is an avid Washington Nationals fan. But more importantly, over time he has re-dedicated himself to improving his health and fitness level.

Barry had never been a member of a gym prior to joining RCSC. He enjoyed playing basketball but eventually was unable to continue to play. He realized it wasn’t good to be so inactive. A close by solution presented itself when the first signs went up announcing that a gym was moving into neighborhood. Barry and his wife Susan joined Rock Creek Sports Club before the club even opened.

A couple of years ago Barry decided to try personal training. He chose Steve Basdavanos because he wanted to see what made Steve such a popular trainer. Barry has been very happy with the training he has received. Steve has been an excellent teacher and sets a good example of what consistent training can accomplish.

When the Weight Loss for Life program was introduced at RCSC in 2010, Barry was one of the first to sign up, with Lee Goldstein as his weight loss coach. Losing weight while enrolled in the program has helped Barry feel healthier and get more benefits from his personal training. Barry also attends Mercedes’ popular yoga classes and looks forward to trying other program options available at the club.

As the years have gone, by Barry has discovered the physical and mental benefits of regular exercise. He is happy that Rock Creek Sports Club has become such a community asset. Barry’s son Will joined RCSC after returning to the area from college so Rock Creek has become truly a family club. Barry’s sense of humor, adventurous spirit, love of good food (but now in moderate amounts) has caused Will to say his father “rules, big time!”

We consider Barry to be an exemplary asset to the club and we are pleased to have him as our member of the quarter.