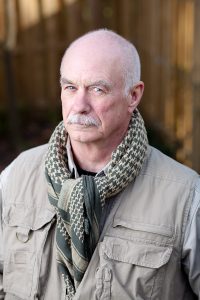 You may have seen Rock Creek Sports Club member David Wood around the gym. He, like many other members here, comes in as often as possible to build strength and endurance to keep up with a favorite hobby — in David’s case, Alpine Climbing.

What you may not know about David though, was his recent impact on journalism history. This past April, David was awarded the Pulitzer Prize in National Reporting for his series “Beyond the Battlefield” for the Huffington Post. This was a first for both David, and for the seven-year old web-based newspaper.

Beyond the Battlefield, a 10-part series which ran for several months on The Huffington Post, explored the challenges that severely wounded veterans of Iraq and Afghanistan face after they return home, as well as what those struggles mean for those close to them. After more than 30 years of covering war and conflicts all over the world, David said he has witnessed numerous injuries and always wondered what happened to them after they were taken away on helicopters or driven off to hospitals.

“You never find out what their lives were like, or what happened to them after that point,” David said. “When the dead come home, tragically, there are ceremonies held all along the way from the time they put the caskets in the airplane to the moment they come home. There’s nothing like that for the wounded. There’s no announcement, they’re invisible and I wanted to find out what their lives were like.” David said just meeting the wounded and the people who helped take care of them was inspiring. “Many of them have been close to death (some even died and were brought back to life) and they prize life more than most of us do,” he said. “They laugh, love, and they cry. Life has become precious and that’s good to be around.”

However, working on the series had its downs too, there are those that struggle and some that don’t even make it. “It’s tough, it’s very hard when it seems like you’re never getting better. You can’t imagine how difficult that could be.”

The most valuable lesson David learned though, and would like to pass along to others, is that if you see a wounded veteran, the worst thing you can do is ignore them. Instead, he suggests you say hello and thank them for their service. If they have time, ask them “Do you mind if I asked what happened?”

“They want to be recognized as people first,” he explained. “They are really proud of their sacrifice and every one of the wounded I spoke to said ‘Yes, ask us.”

The Pulitzer Prize win was unexpected David said, and it came on a day when he was lying in bed recovering from a recent knee surgery. “I wasn’t even thinking about it, when I got the call,” he said. “It’s really humbling, because this is the highest respect your peers can give you. What’s really amazing is that you also get to go to a luncheon with other winners — both past and present — and meet all these other accomplished and talented writers.”

Currently, David is working on a new “disconnected series” interviewing warriors returning come from combat — some wounded, other not — as they deal with issues such as anxiety, memory loss, and the job hunt in a civilian world. You can read his articles in The Huffington Post here.