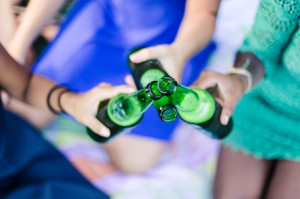 You probably don’t need a scientific study to tell you that if you’re trying to stay healthy, build muscle, etc., you probably shouldn’t drink copious amounts of alcohol.  But does alcohol effect the recovery process? That’s what one group of Australian scientists decided to find out.

Runner’s World explains the experiment as such:

“The basic idea of the study was straightforward. Put volunteers through a rigorous exercise routine (it was a mix of weights, sustained cycling, and high-intensity sprints, designed to simulate the demands of a team-sport match); have them do it three times. After two of the trials, give them the “optimal” post-exercise nutrition: 25 grams of protein immediately after, a carbohydrate-rich meal two hours later, and another 25 grams of protein four hours later. During this recovery period, have them drink a bunch of drinks, either containing placebo or a total of 1.5 grams of alcohol per kilogram of body weight. In a third trial, give them alcohol but replace the protein with calorie-equivalent carbohydrate.”

The Findings:  Not really surprising —  the scientists found that even when the men ate well,  alcohol can impair the recovery process AND adaptation to training and/or subsequent performance. Just something to keep in mind the next time you’re celebrating on a Saturday while you’re in the middle of training for that 5K or weightlifting competition.