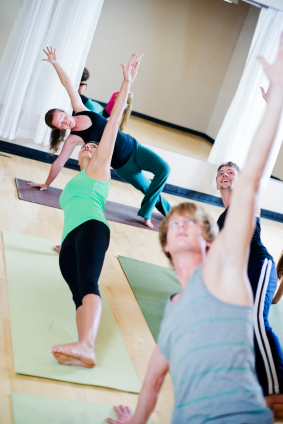 Feeling down? Try a little down dog in one of our Rock Creek Sports Club Yoga classes!

Researchers from Duke University recently reviewed more than 100 studies to determine if yoga truly has any benefits when it comes to treating certain psychiatric disorders. The results: Yoga does indeed have some power in helping mild depression, and sleeping complaints, as well as improving symptoms for schizophrenia and ADHD patients already using medication.

“Most individuals already know that yoga produces some kind of a calming effect. Individually, people feel better after doing the physical exercise,” lead study author Dr. P. Murali Doraiswamy, a professor of psychiatry and medicine at Duke University Medical Center, told Time. “Mentally, people feel calmer, sharper, maybe more content. We thought it’s time to see if we could pull all [the literature] together … to see if there’s enough evidence that the benefits individual people notice can be used to help people with mental illness.”

Of course, this doesn’t mean yoga should replace any kind of treatment or therapy, but it does show it could in fact help help you feel better.

Stress Reduction: When we’re stressed out our brains release a large amount of a hormone called cortisol into our bodies. Cortisol can be a good thing during an emergency (think broken bones) but otherwise it can lead to ulcers, throw off our immune system, and lead to high blood pressure, and weight gain.

The breathing exercises in yoga can help you learn to control your breathing, and return your body’s nervous system back to its normal, rest and relaxed state.
Increased Fitness: Yoga isn’t just about relaxation! Many of its poses, will work every muscle in your entire body all at once. At the same time, because your working against the natural resistance created by your body, in time you’ll build strength and endurance as you hold these poses for a longer period of time.

Increased Flexibility: In yoga, you’ll often practice a series of poses known as “asanas” which safely stretch your muscles, helping to release the lactic acid that’s built up in your muscles from general use (or overuse) and causes stiffness, pain and fatigue. Yoga also increases your range of motion in your joints, and stretches your soft tissues including ligaments, tendons and the fascia sheath that surrounds your muscles. In one study, participants had up to 35% improvement in flexibility after only eight weeks of yoga.

Increased Health: Studies show that Yoga can lower blood pressure, slow the heart rate, boost your immune system, relieve back pain and arthritis, improve energy levels and help with depression. It can also help those night owls fall asleep faster, one study found that insomniacs fell asleep minutes faster and slept an hour longer each night after two months of doing a 45-minute series of yoga poses daily before bed.

Check out our schedule here, and try Yoga today!