11 Tips for a Healthier Thanksgiving 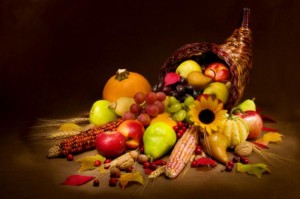 The holiday season can do a damper on an otherwise healthy lifestyle. To avoid setting yourself back, giving up on that diet, or getting back into bad habits, follow this guide for a healthier Thanksgiving.

1. Pick healthier items to fill your plate with

When choosing what dish to cook, or to scoop on your plate, be aware of the health differences. Chose white meat over dark meat, green bean casserole over sweet potato casserole, pumpkin pie over apple pie, a dinner roll over stuffing and gravy over cranberry sauce. For many of these, it’s as simple as caloric differences but other aspects play a role. Consider pumpkin pie and apple pie. Usually the former goes with whipped cream and the latter with ice cream. Which of those two do you think has more calories? Gravy may come as a shock but the same serving of gravy is around 30 calories while cranberry sauce is around 110. Why? Sugar.

Other techniques to avoid overeating include: staying warm, since dining in colder environments makes us eat more; sitting next to someone healthier, since we are social creatures and tend to mirror our peers; or chewing on gum, studies suggest the act of chewing on gum tricks your brain into thinking its eating more. Some studies even suggest chewing burns a couple of calories.

Keep your dinner plate before serving yourself dessert. By using it as a reminder for what you’ve already eaten, you’re less likely to serve yourself a huge slice of that holiday pie.

Lastly, try picturing the food you’re about to eat before eating it. Science has found simply visualizing the food makes us less interested, think “bored” by it. The same can work with visualizing exercising. It has been found that those that pictured the workout or the activity they plan to do after eating, ate less.

3.Picking the right lighting and colors

When it comes to plates, a theory called Delboeuf Illusion, shows that when there is a high contrast in the food on the plate with the plate color, people eat less. People eat less, also, on blue plates or when food is dyed blue. While I don’t suggest, for festive reasons (blue is not a thanksgiving color!) dying your food blue, the plate thing could work if you are creative. Blue is a rare occurrence in nature and therefore an appetite suppressant. Blue, purple and black were warning signs for hunter gatherers who were looking to avoid poisonous foods.

Lighting also makes a difference. Dim lighting makes you eat less but bright lighting makes you choose healthier meals! What it comes down to is alertness. The reason bright lighting leads to healthy choices is because of diner’s alertness. In studies, when given a caffeine placebo, people were just as likely as those in brightly lit rooms to make healthful choices. So there are two options: leave the room bright when people serve themselves then dim the lighting to eat, or drink a cup of coffee or go on a brisk walk before sitting down for that dim lit thanksgiving meal.

People tend to willingly forget the added calories that come in alcoholic beverages. This gets even harder when the holiday season rolls around and there are so many fun holiday drinks to pair with your feasts! But not only does alcohol add to your daily calorie count, it also increases your appetite.

Instead, drink lots of water. Not only does this hydrate you but by having something to sip since sometimes having an alcoholic drink is just about the social act of taking sips. Use low calorie mixers or choose a glass of wine over a holiday cocktail. Drink slowly, just as you should eat slowly, to consume less and try to keep the focus on friends and family; that’s what thanksgiving is about anyways! 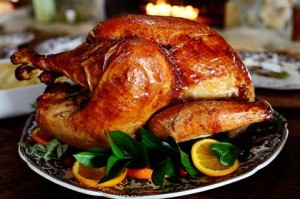 5. Spread the meal out

Many of us get so excited for the Thanksgiving feast that we fast in the morning to leave room for all the food in the mid to late afternoon. However, this leads to binging! While every person is different, some can fast and be fine, and others need small meals every couple of hours, everyone should at least have a small meal before the big one to avoid over eating. Eat a light breakfast or a tiny and healthy snack beforehand to keep the cravings down.

6. Fit that morning workout in

Get a quick workout early in the day. One of the great events of Thanksgiving is the Turkey Trot! There are turkey trots across the country and several in the area! If you don’t have time for a big event like this try a home workout.

Still don’t feel like you have enough time do a home workout? Go a little harder on the cleaning! Housework can burn a bunch of calories. Mopping floors burns about 112 every 30 minutes, vacuuming around 119, sweeping around 136, cleaning windows around 167 and moving furniture (rearranging for all of the guests) can burn 100 calories in 15 minutes!

Along with cleaning, you can burn some calories by cooking too! Burn around 122 calories seasoning, prepping, stirring and whisking while cooking the turkey. Burn 54 calories peeling, cutting and mashing potatoes, another 54 trimming, cooking and tossing green beans for green bean casserole, and another 54 for prepping and stirring cranberry sauce. Burn 135 calories measuring, prepping and mixing pumpkin pie, and last but not least, in 75 minutes of total time, preparing traditional sausage stuffing, you can burn 203 calories chopping, sautéing, and mixing.

Going off on water helping you avoid alcohol, it also helps you eat less! Not only does water fill you up but it also helps you pinpoint your true hunger levels. Many times we think we’re hungry when really we’re just dehydrated. The feelings of hunger– empty stomach and gurgling stomach, low energy levels, light-headedness– are also associated with thirst. Also, by choosing to drink water, you are choosing to not drink something else. In a 2015 BMC Public Health study, it was found that every 3.4 ounces of water consumed, people drank .7 less in caloric beverages.

9. Get the right amount of sleep

Sleep has an enormous impact on dietary choices. Not only does it impair decision making and rev up the brain’s reward centers but insufficient sleep impacts the hunger and fullness hormones ghrelin and leptin. Cortisol levels spike, asking your body to conserve energy to fuel your waking hours, and your body’s ability to process insulin goes awry, which leads to trouble processing fats from the bloodstream and instead, storing them as fat.

While you may have worked out earlier in the day, few people will ever leave a Thanksgiving meal with the sudden urge to hit the gym, so it’s good to find another way to be active. Watching football after the feast is an American tradition but just sitting after eating so much is probably the worst thing you can do. Instead, go for a light stroll or initiate a family dance party! 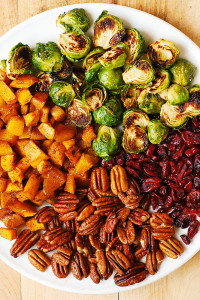 While most people look forward to traditional Thanksgiving food all year, sometimes it’s nice to switch it up. Make your own cranberry sauce instead of buying store bought that’s filled with sugar. You can have fun with it, with this orange cranberry or this cranberry apple recipe. Try cauliflower stuffing instead of the traditional sausage stuffing. Pick a unique but festive side dish that’s not usual on the menu like balsamic cranberry brussel sprouts, or roasted brussel sprouts, cinnamon butternut squash, or a fall harvest salad with pumpkin harvest dressing. Or just pick a lower calorie version of the traditional dishes such as this green bean casserole or this sweet potato casserole. Sometimes just switching a topping such as marshmallows for pecans can make a huge difference.

Enjoy these tips but do not stress! Enjoy your Thanksgiving!